4. HOW DOES SF7 FIGHT AGAINST EXTREME WEATHER CONDITIONS?

The hybrid experimental-numerical approach developed through working with Soltec accurately estimates tracker behavior under the action of wind in multi-row arrays and allows flexibility in the design process that is generally not practical through full aeroelastic model testing.

Several studies have shown that certain wind-design code standards applied to solar trackers are insufficient to design these structures reliably, as they do not consider the second order effects produced by the action of wind on the tracker. In order to prevent related structural instability issues, it is necessary to find new analysis methodologies that improve the design of reliable tracker structures by quantifying their response to the second order effects of the wind. The wind consultant leader RWDI in collaboration with Soltec has developed an innovative method, Dy-WIND for comprehensive dynamic analysis in tracker array wind design. With 15 years specialist experience, Soltec has incorporated this method in the design of Soltec trackers.

When designing solar trackers, several factors influence their response to the dynamic effects of the wind: 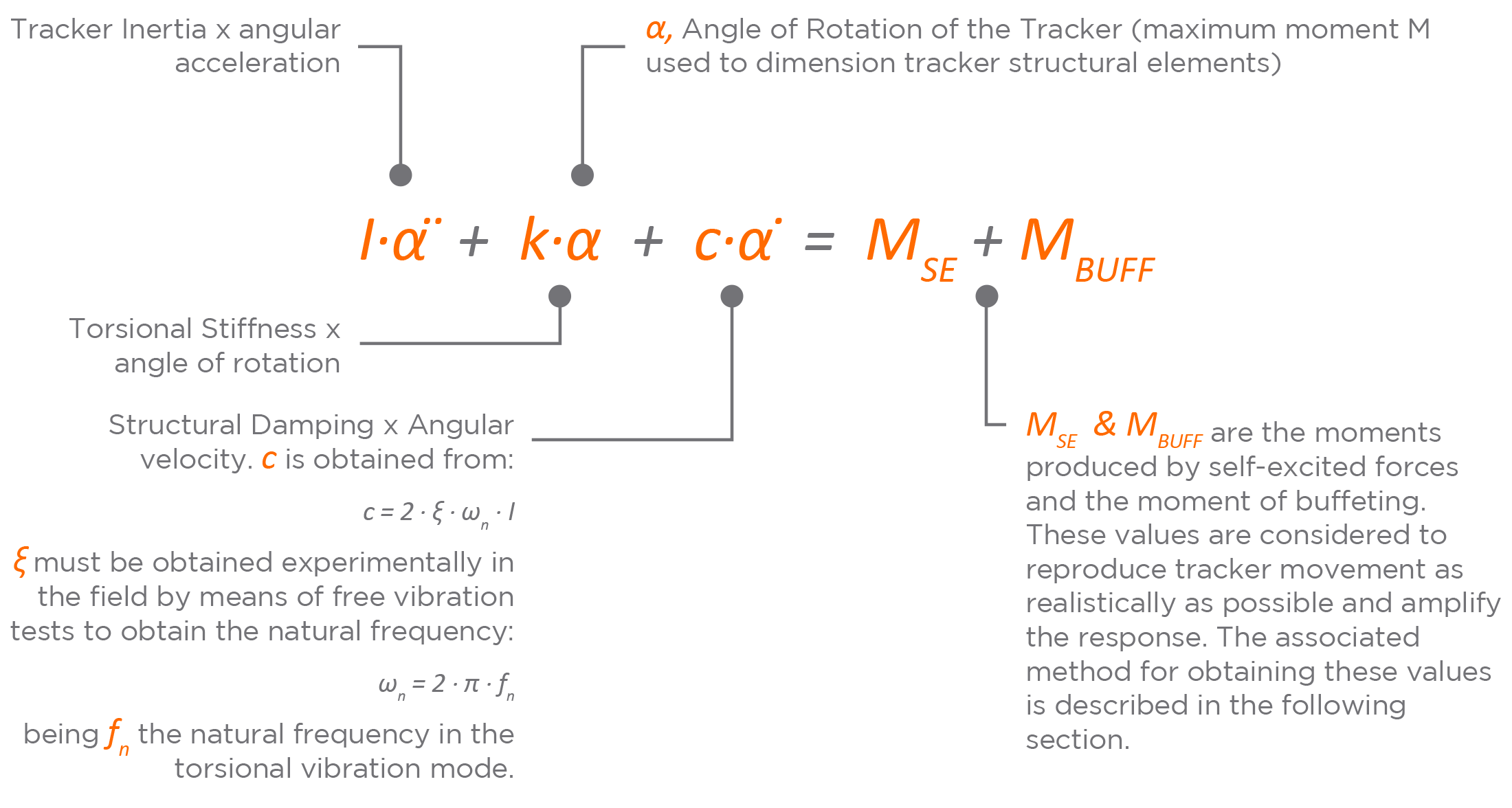 In order to fully study the wind effects on the tracker structure, several phenomena such as the wind fluctuation and turbulence must be considered. The fluctuation portion of wind loads is due to wind turbulence and the dynamic response of the structure. The inertial loads due to resonant vibration can add significantly to the fluctuating wind loads.

The innovative approach that has been developed working together with RWDI combines results of wind tunnel tests along with numerical analysis to study the influence of the main mechanisms causing vibration or instability in the tracker.

Resonant vibration is caused by either general wind buffeting or the wake resonance effect caused by the turbulence generated from the upwind rows of a tracker field. This mechanism is studied with wind tunnel pressure data and the load amplification is accounted for by a hybrid method of Dynamic Amplification Factors (DAF) and buffeting analysis method (BAM) using the wind tunnel data as input.

Flutter is a self-excited aerodynamic instability in which the aerodynamic forces depend on the rotation and angular velocity of the structure itself, and it can lead to very large amplitudes in torsional motion or coupled torsional and vertical motion. For trackers relying on a central torque tube driven from a single location, a twisting mode of vibration is created by a form of flutter generally initiated at the ends of the row. Torsional Flutter characterizes high tilt angle behavior.

Two numerical analyses are implemented in order to address mechanism 2 and 3.

Buffeting Analysis Method (BAM). Predicts the tracker response (load and deflection) due to wind action for multi-row arrays in the time domain.

To performing these numerical analyses it is fundamental to conduct two types of wind tunnel tests. The experimental data obtained in the wind tunnel is combined with numerical methods to obtain each method (DAF-BAM, FAM & BAM).

The conventional wind tunnel pressure test uses rigid models and can predict the wind force on each row taking into account the airflow wake behind each row. This works to determine the dynamic amplification factors (DAF) to cover the design wind speed range as well as all wind directions. Wind speed measurements using this model are also necessary as input into FAM and BAM for multi-row arrays.

The wind tunnel dynamic test uses aeroelastic section models to capture response and furthermore predict the behavior of the structure as a function of time and wind speed. This works to determine FAM and BAM coefficients.

Static wind load coefficients are obtained from the wind tunnel pressure tests. These coefficients do not include an allowance for resonant loading caused by resonant vibration or wake-induced buffeting. Dynamic Amplification Factors (DAF) account for the load amplification due to these effects, depending on the natural frequency of vibration of the structural system, wind speed, chord length, as well as the damping in the system. Wind speed measurements that provide the relative change in velocity throughout an array are also necessary using the rigid model as input into FAM and BAM.

It is important to note that these coefficients are based on wind tunnel tests using rigid models, and therefore, they do not include fluid-structure interaction effects (or aeroelastic effects). These effects are accounted for by using the measured wind tunnel pressure data as input to the time domain buffeting analysis. This hybrid approach of Dynamic Amplification Factors and Buffeting Analysis Method allows for a full prediction of the loading on multi-row arrays over all wind speeds and wind directions. This method shows that the first two exterior rows in a field of trackers are the most affected. Beyond the second row, the rows of trackers have a sheltering effect and the wind forces on the inner rows are notably reduced.

In order to study aeroelastic effects associated with instabilities, FAM and BAM must be addressed. The first step to perform these two methods is to obtain the aerodynamic derivatives from the wind tunnel dynamic tests, and then numerical methods and simulations are implemented.

To do this, a section of the tracker is modeled at an appropriate scale, and then it is investigated in the wind tunnel designed for this purpose. By implementing a spring suspension system and using eddy-current damping, the torsional stiffness, inertia and damping coefficient are replicated, allowing model rotation.

Once the aerodynamic derivatives (for stiffness and damping) have been obtained in the wind tunnel, two different numerical models are developed in order to implement FAM and BAM studies:

The hybrid experimental-numerical approach developed through working with Soltec accurately estimates tracker behavior under the action of wind in multi-row arrays and allows flexibility in the design process that is generally not practical through full aeroelastic model testing.

The stability of the tracker is analyzed to evaluate its response to the dynamic actions of the wind. It is important that instability phenomena, such as torsional galloping and torsional flutter, are taken into account when designing trackers and predicting their behavior.

The results of this analysis provide the variation of total damping (structural + aerodynamic) as a function of wind speed. Instability is defined as the point when the total damping is less than 0. This study is very relevant as it marks the critical wind speed before the tracker goes into an instability.

This method can be applied to multi-row arrays through the application of wind speed measurements at different angles of inclination of the tracker and shows how the total torsional stiffness of the system (structural + aerodynamic) decreases as wind speed increases. This influence has associated with it a loss of natural frequency, so the tracker tends to be more susceptible to the buffeting actions of the wind as wind speed increases for low tilt angles.

Application of this method should be mandatory in the design calculation of solar trackers since it is the method that best predicts the behavior of a multi-row tracker array under wind action, while providing flexibility in the design process generally not practical through full aeroelastic model testing. This method can simulate both the full spectrum of wind turbulence fluctuations and the response of the tracker due to buffeting and self-exciting forces. The dynamic forcing is amplified by the structural motion and could produce structural issues with wind velocities below the critical onset speed for an aerodynamic instability.

BAM is the recommended method to account for the full spectrum of the wind peak fluctuations. This means that the maximum moment or maximum tracker rotation will be calculated from the maximum peak wind speed, which represents the worst-case loading. This is critical in regions close to the maximum allowable wind speed before instability occurs.

With this method, maximum moments and force due to wind actions can be analyzed in each member of the tracker, so the design of each of these parts is more reliable than with any other method.

Buffeting analysis results in the time series of the tracker’s rotation and these responses can be used to predict the maximum moment response induced by the wind, effectively evaluating the combined effects of the average wind loads, wind fluctuation peaks, inertial loads and self-excited forces. If the overall damping in the system is negative the numerical solution for the tracker will be unstable (beyond the maximum allowable wind speed given in the flutter analysis). 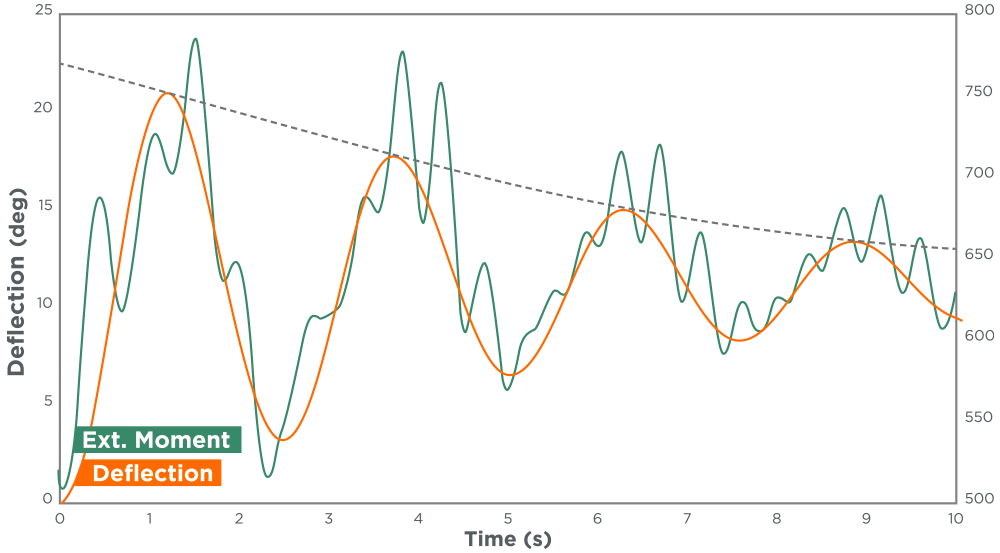 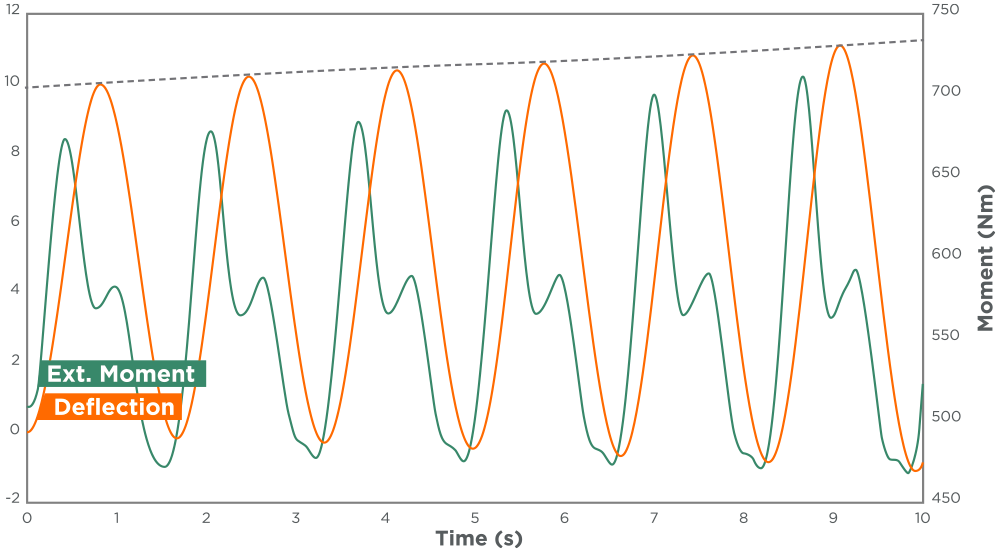 These results depend greatly on the overall tracker length, chord length and the torsional stiffness, which influence the tracker’s natural frequency.

An adjacent study tested different configurations for commercial dampers in order to increase the c damping coefficient. It was concluded that the extra damping provided by dampers is not sufficient to mitigate the torsional stresses in solar trackers (for two-up portrait module configurations) at low tilt angles. There are no commercial dampers that can withstand the tensile and compressive stresses to which it would be subjected. Soltec contracted the study for a shock absorber that could alleviate these effects, but the cost of the final design was higher than the full tracker, so implementing such a system was discarded. Rotation bushings on simple piles already regulate torque-tube frictional stress, making a more rigid structure against torsion. 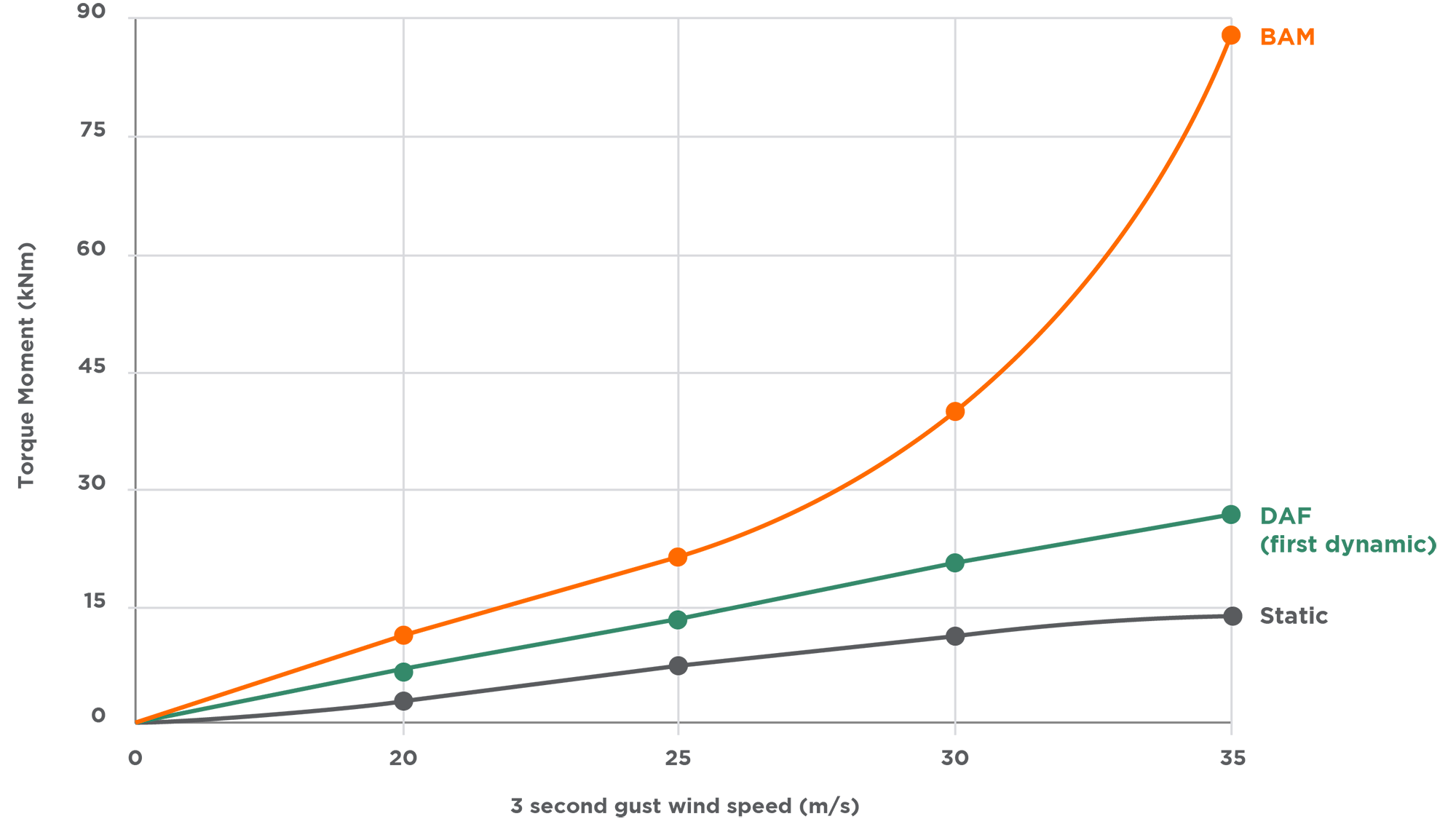 The major effect produced by wind is the torsional moment. This torsional moment affects the torque tube and the motor support assembly. It is significantly increased by the dynamic effects described in this document. In the following tables there is a comparison between the static and dynamic moments that would affect each of the tracker components for several wind speeds according to the ASCE 7 and Eurocode.

In conclusion, it is observed that dynamic wind effects amplify considerably the torsional moment on the tracker structure. Reliable tracker design requires thicker-wall tubes and a motor support assembly of greater cross-section than those indicated when considering only static coefficients. As can be seen, the moment increment is found to be higher per the BAM approach than the DAF approach. Applying BAM results indicates a material increment in the cross-sections of structural profiles to gain strength and stiffness, and consequently, a proportional increase in the unit cost per tracker.

4. HOW DOES SF7 FIGHT AGAINST EXTREME WEATHER CONDITIONS?

Onsite weather stations are employed to gather site-specific data. Assessment of meteorological data and forecasting are essential in reducing hazards and, consequently, investment costs and losses during the operation of solar plants.

These stations measure wind speed and wind direction. To obtain these data, Soltec’s stations are comprised of an anemometer and  cameras to be able to watch and record what is happening in the PV plant. 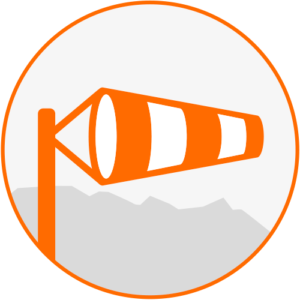 From the moment in which the first solar module is installed on the tracker structure until the PV plant is commissioned, Soltec has identified a risk window that must be addressed.

In this regard, Soltec is already implementing in all electronic controllers the self-stow feature by leveraging the self-powered back-up batteries.

These back-up batteries must be powered by using one module of the tracker as soon as the modules are assembled on the structure, which will energize the controller and will automatically track the tilt of the torque tube thanks to the embedded inclinometer to accurately position the tracker in an accurate 0º or 45º stow.

The risk of out-of-stow trackers prior to their commissioning is therefore dismissed. 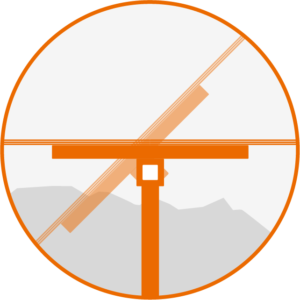 Some PV installations are very regularly exposed to lightning and overvoltage, which can considerably reduce the life expectancy of the electronics devices.

Integrated SPD in the tracker controlled avoids the lightning current passing through the electronic device, reducing the risk of damage. 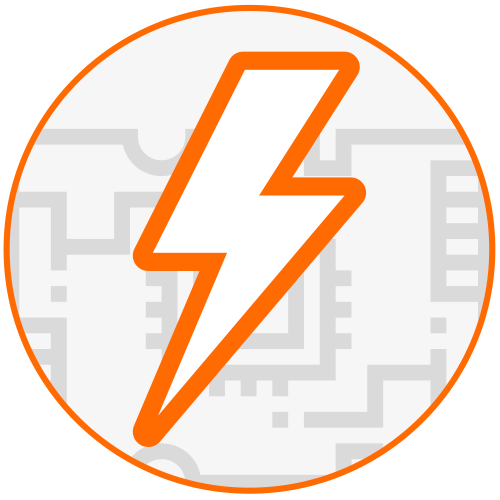 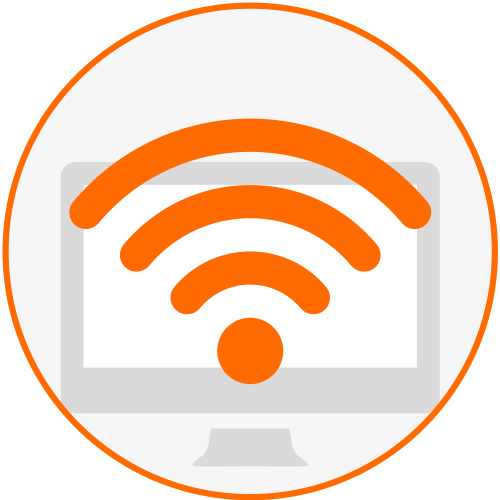